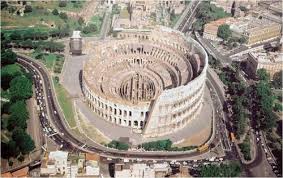 It’s generally accepted that the contemporary world is more technologically advanced than the ancient one. The Etruscans may have dreamed of space travel, but they were unable to transport themselves to Schenectady, New York, let alone the moon. Yet we can’t be too smug. Sure we carry the Internets in our pockets and heat our meals in seconds, but we can’t touch ancient Rome when it comes to concrete.

Throughout the Mediterranean basin, there are ancient harbors constructed with 2000 year old Roman concrete that remain more or less is perfect functioning condition. And as we gaze about the remnants of the ancient world, we see aqueducts, roads and buildings that have survived remarkably well over time. When we compare these structures with our own, we find contemporary concrete sadly lacking.

Roman concrete was superior to our own and now scientists understand why:

The secret to Roman concrete lies in its unique mineral formulation and production technique. As the researchers explain in a press release outlining their findings, “The Romans made concrete by mixing lime and volcanic rock. For underwater structures, lime and volcanic ash were mixed to form mortar, and this mortar and volcanic tuff were packed into wooden forms. The seawater instantly triggered a hot chemical reaction. The lime was hydrated — incorporating water molecules into its structure — and reacted with the ash to cement the whole mixture together.”

The Portland cement formula crucially lacks the lyme and volcanic ash mixture. As a result, it doesn’t bind quite as well when compared with the Roman concrete, researchers found. It is this inferior binding property that explains why structures made of Portland cement tend to weaken and crack after a few decades of use, Jackson says.