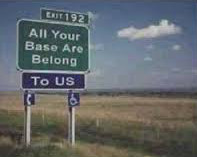 Your JoeDog followed the events in France pretty closely. After reading two days of reports from the US and Europe, he had no fscking clue what was going on. The killers were captured and one was dead! Um, the killers are in the woods with helicopters overhead! Um, no, they’re inside a Jewish deli back in Paris. In a rush to publish, the only thing they did was add to our confusion.

And so it goes with the CENTCOM hack. Your JoeDog heard ISIS was inside Pentagon computers!!1!1!!! After sifting through news reports, it appears that ISIS simply defaced their Twitter and YouTube accounts. Wait a second — CENTCOM has a twitter account? What do they post besides “blew up some shit today!”

Is this a Big Deal? It depends on your perspective. From a security standpoint, it’s not. Imagine if you shared your GMail password with a friend and he started sending dick pics to everyone in your address book. That’s pretty much what happened. ISIS gained access to the accounts and pranked the military.

From a public relations perspective, it’s embarrassing. Unless they’re absolute morans, no sensitive data was compromised.  You wouldn’t link your bank account to your twitter feed, there’s no reason to believe CENTCOM would do the same with its operational servers. But at the same time, it paints US military as a careless organization. It didn’t use two-factor authentication, its credentials were easy to crack and/or it fell for a phishing expedition.

It does make you wonder what else they’re “protecting” with ‘password123’ or to what extent the people inside Central Command are click-happy. Those are speculative musings which may have no basis in fact. Still, you can imagine a military ass-chewing that began with the Commander-in-Chief and worked its way down to the lowliest private. Your JoeDog is glad he doesn’t work in CENTCOM today.