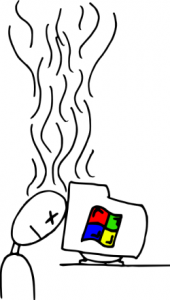 The Windows team upgraded a server to W2K8 and now its schedules are failing. The jobs kick off but abend and have to be run manually. Your JoeDog has been sucked in because he manages enterprise scheduling. Exciting!

“You tested this before you went live, right?” Um, …

The team can run jobs manually but they fail in the scheduler. Your JoeDog thinks this is a classic case of ENV mismatch, a discrepancy between the logged-in environment and the sheduled runtime environment. He was implored to open a case with IBM. Their conclusion? An ENV mismatch.

Still, the Windows team can’t figure it out. The jobs kick off in the background and they can’t capture any error messages. Those who live by the GUI, die by the GUI. Thus far they’ve tied up more than 100 man hours trying to solve a problem that a subpar Linux admin could solve in a few minutes on his own.

Add this to the hidden cost of Microsoft Windows.