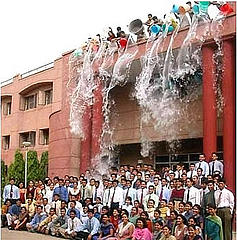 A Florida middle school student shoulder-surfed his teacher’s password then defaced his login page with a photo of two men kissing. That’s funny! Ten bucks says he chose that picture because his teacher hates teh gayz.

Your JoeDog loves this gag. It sounds like something he might have done in middle school. Back then, a stunt like that would earn him a few nights detention. In contemporary America, it’s a felony charge.

You heard that right. The Pasco County Sheriff’s Office is charging an eighth grader with unauthorized access of a computer system which is a felony offense.

“Even though some might say this is just a teenage prank, who knows what this teenager might have done,” Sheriff Chris Nocco told the Tampa Bay Times. Just as easily he could have said, “My dick is only three inches so I have to find some way to earn respect.”

There’s something in that statement which bears repeating: “who knows what this teenager might have done.” That’s some post-9/11 thinking right there. Wait! Why do you call it post-9/11 thinking? Because that was the moment when we stopped thinking about things that happened and started worrying about shit that might have happened.

He might have erased the entire hard drive!! Did he? No. He defaced his teacher’s login page.

The student, Domanik Green, student-splained himself to Your JoeDog’s  satisfaction: “If they would have notified me it was illegal, I wouldn’t have done it in the first place. But all they said was, ‘You shouldn’t be doing that,'” said  he told WTSP teevee.

Sheriff Little Cock and the Pasco County Sheriff’s Office need to get over themselves….