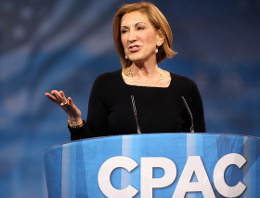 So Your JoeDog heard that Carly Fiorina is running for President. Why? She’s Donald Trump without the comb-over.

Or she would be Donald Trump if she had a more successful business career.

With only a failed Senate run on her political resume, her presidential aspirations are tied solely to her tenure at Hewlett-Packard. During her stint at at that company, she laid off thousands, botched a high profile merger, fought with just about everyone until she left on a $21 million dollar golden parachute. If that’s presidential timber then the bar is lower than I thought….

And that’s all the time Your JoeDog will spend on Carly Fiorina. Does he think voters are smart enough to see through whatever bullshit she spreads on the stump? Oh, hell no. He’s confident that big monied interests won’t give her a dime and her campaign will end as soon as it began for lack of funding.