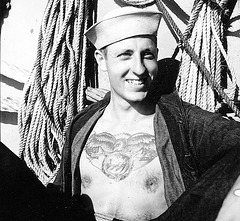 Your JoeDog hasn’t been to the public pool in years but as a child, he was there almost every day of the summer. It was great. He could get a sugar high off Italian ices and chase sexy girls in bikinis. Your JoeDog wasn’t very old back then and his girl chasin’ skills needed refinement. When he saw a one he liked, he’d try dunk her in the water.

This was the 1970s. when the World War II generation was entering its leisure years. The pool was filled with young and old, Boomer school kids on summer break and old people entering retirement. Those little old ladies didn’t wear bikinis but they sure as hell rocked the one piece. Those old guys were covered with dark blotches up and down their arms and torsos. When you got behind an one in the Italian ice line you could see the blotch was actually a Navy anchor or some shit.

Your JoeDog’s generation doesn’t have much ink. If you see a Boomer or an Xer with a tattoo, you can bet they got it late in life. We grew up surrounded by blotchy smears at the public pool. Those Second World War era tattoos may have been hip during the Big Band Era but they looked like a bad case of melanoma by the time of the Oil Embargo. We saw those things and said, “No thanks.”

Old soldiers may never die but at some point they stop going to the public pool. Gen Y and the Millennials never had a chance to see ol’ CPO Miller’s blotched out Navy anchors on a hot summer day. With no reference images of aging tattoos, a new generation was free to cover itself in ink.

Now Your JoeDog doesn’t pass judgement. The girl at the coffee shop has Keith Haring images tattooed on her arms. He thinks they’re neat; they’re just not for him. But as it happens, our generational revulsion toward tattoos has culminated in an unforeseen benefit. The image of aging tattoos at the public pool, set us on a course toward technological advantage. The Apple iWatch works just fine on members of your JoeDog’s generation.