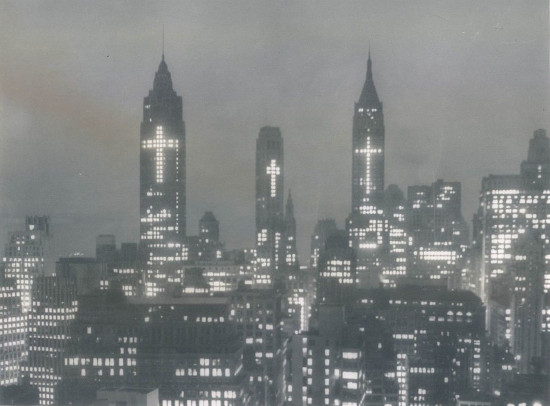 The NYC skyline during Easter of 1956. There would probably be an uproar today. ‪ #‎HeIsRisen‬.

See that photograph at the top of this here blog entry? It’s currently making the rounds through social media along with the caption below it. A fellow Dogger brought it to our attention. There was something about the image that didn’t sit well with him. We agree.

First things first. Yes, there would be some uproar if this happened today. The US is more diverse now than it was sixty years ago. There might be fewer gripes if they celebrated all religious holidays along with Easter. Although that might be even messier. If contemporary uproar is your concern, imagine what would happen if they displayed a crescent during Ramadan.

Second things second. It’s entirely possible that something like this did occur in 1950s New York. Your JoeDog used to live in Manhattan and he’s seen a wide array of light-oriented messages. It wouldn’t surprise him at all if Easter was crossy then. 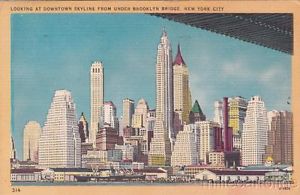 Still, something doesn’t sit right. The tall building in the middle no longer exists but Your JoeDog found it in a contemporary postcard for sale on eBay.

We can see that structure here on the right. Of the three tallest buildings depicted here, the Chrysler Building is in the foreground and the Empire State Building (ESB) is to the rear. This means we’re looking at Manhattan over the East River from Brooklyn. Therefore the third tallest building in this group sits to the south.

In the photo with the Easter crosses, we find ESB on the left and Chrysler on the right. That means the crosses are north of us. Now consider the middle building. It’s north of both ESB and Chrysler. How is that possible? In the postcard it’s clearly to the south. Was the photo reversed? That’s possible but then buildings get taller as you near the river. That may have been accurate in 1956 but it’s not now.

So Your JoeDog isn’t sure what to make of this viral photograph. If the thought of a crossy New York puts a spring in your step, then who is he to harsh your mellow? At the same time, he wishes we would apply a little more scrutiny to items we pass through social media. It’s jungle of misinformation out there.