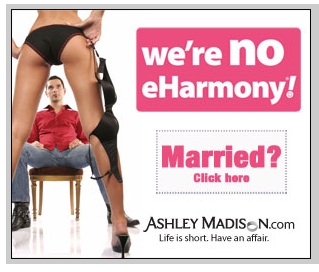 Gizmodo unearthed more evidence that most users cheated with bots. As a result of the hack, a minister who spent nearly $3000.00 by the time Your JoeDog grew bored tabulating his transactions killed himself. And finally TechCrunch shows us that not only did Ashley-Madison users make poor life decisions, they also used shitty passwords.

TechCrunch cracked the file with a decryption utility. It didn’t take them long to unearth more than 25,000 matches thanks to poor passwordsmithing. While that’s interesting, Your JoeDog was much more fascinated by their usernames.

They look like they were created by 7th grade boys. Let’s examine them after the jump!

One tenth of one percent of men have a nine inch dick but many Ashley-Madison users have much more than that. Consider these usernames:

There weren’t seventy-two other users named 11INCHES4U. I assumed ’73 was his birth year but when I tested that theory I found he opened three accounts with three different birthdays none of which were in 1973.

Two people registered for completely different reasons: 11YEARSMARRIED and 11YRSNOWSINGLE each needed different types of fulfillment. One is lonely and the other is four years late on his seven year itch.

In some cases, users exercised as much creativity on their username as they did with their password. Consider the member known as 1234. He lacks creativity in both departments. His password was 3456.

The user 18ANDHORNY1 was born in January 1974. And yes, there was already a user known as 18ANDHORNY. He was born in 1962. I assume their names are a request and not a description.

For some cheaters, it’s important that you know what kind of car they drive. Consider 1957PORSCHE. He drives a 1957 Porsche. Seriously, a 1957 Porsche. You don’t believe me? His password is 1957porsche.

Quite a few guys wanted someone to do their banging for them: BANGMYGIRL, BANGMYWIFE and BANGMYWIFE1 through 9 have a busy calendar as it is, you guys.

BASSPLAYER1 through BASSPLAYER44256 couldn’t find any groupies so they gave Ashley-Madison a try. Go get ’em, groupiebots. Bass players need love, too. And so does CUMFUCKMENOW.