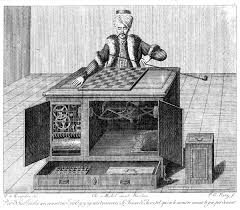 I write a lot of software with which I interact. If it’s easy for me, then it’s easy for you. I try to keep it easy for me. JoeDog’s Pinochle is the first program against which I’ve competed. It’s been a surreal experience.

The program was designed to be competitive against me. Tonight it took two out of three games. The damn thing knows me inside and out. And why not? I wrote it. And while I can exploit some knowledge of its inter-workings, I can’t predict all its behavior. It was designed to learn bidding from experience.

Bidding is the hardest aspect of this game. The team that wins the bid has an incredible opportunity to earn a lot of points. At the same time, overbids come at a large price. A failure to make the bid means the bid is deducted from your score.

When the game was first released, its bids were implemented programmatically. I like to think I’m a pretty good programmer but that version of the game played like a moran. To improve it, I had the game play itself hundreds of thousands of times. It would store those results and use them to generate future bids.

This implementation has resulted in a much more competitive program. Now it bids more aggressively — much more aggressively. It bids like me which is odd because I didn’t tell it to do that. I told it to learn from its experience and as a result of that experience, its personality morphed into mine.