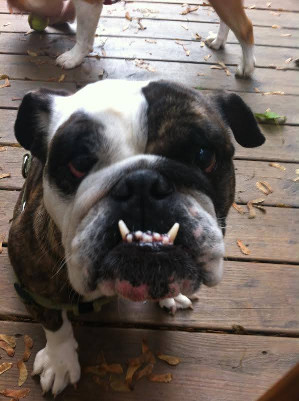 Meet the newest member of the JoeDog family. This is Baby Cow — with her markings she looks like a little tiny baby cow.

She was abused by a Mennonite farmer who tried to breed her. When that failed he tied her to a pole along a highway with a sign that read “Free bulldog.” By chance, a member of the Long Island Bulldog Rescue happened to see her. She stopped and called the state agency which enforces puppy mill laws. The farmer was fined.

That night Your JoeDog had three beers at a local brewery. Mrs. JoeDog saw an announcement on the Long Island Bulldog Rescue’s Facebook page. They needed someone to foster this dog. Your JoeDog reluctantly agreed because … well, did he mention three beers?

When Baby Cow arrived she was in sorry shape. Her eyes were cloudy and her rear legs were both injured. At first the vet suspected glaucoma but it turns out they were irritated by her lashes. Baby Cow’s legs were another story. She had two torn ACLs, probably the result of standing long hours on top of chicken wire. Puppy Mill breeders frequently stack their dogs in chicken wire crates. You don’t want to be the bottom dog. That one gets peed and pooped on by the dogs above.

She’s already had one operation to fix her eyes. Aren’t they beautiful? She still needs two more to fix her rear legs. LIBR promised to pay for those operations in January. They are promised grant money from a large national pet store chain. (Your JoeDog is unsure if he can mention the name so he’ll keep it to himself for now.) If the grant falls through, he’ll try to raise it himself.

Your JoeDog may have reluctantly agreed to take her, but he’s not letting her go anywhere now. As Mrs JoeDog says, “That’s Your Baby Cow.”