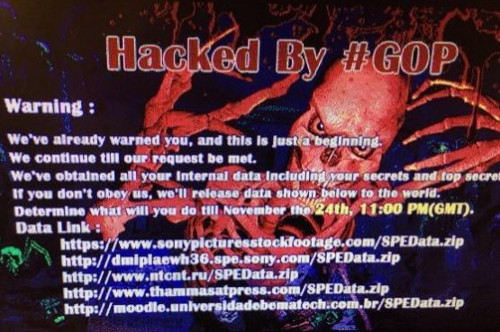 Gawker is on the case, you guys. Today they ran a story which raised concerns about the official FBI narrative of the Sony Pictures infiltration. It’s mostly a recap of concerns we’ve already raised. However, down in the comment section we find an interesting perspective. Let’s examine that comment.

The commenter taught English to Korean students for a several years. To this person, the splash screen doesn’t read like English used by a Korean ELS speaker:

The use of contractions (we’ve and we’ll) is characteristic of someone near-fluent, too sophisticated to be dropping articles.

The repeated pronouns (“we” and “you” and “us”) doesn’t seem like how a Korean person would phrase it, because Korean pronouns are freighted with t/v distinction and honorifics that English doesn’t capture. For that reason, my students circumlocuted those words when they could because they felt imprecise.

It’s totally possible that the North Korean version of Korean is different enough than the South Korean that the markers would be different, though.

The author of the article, Sam Biddle, responded “Interesting.”