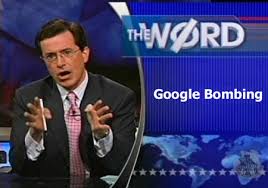 Before he blogged about technology, Your JoeDog blogged about politics. One day, he received an inquiry from the Detroit Free Press. The author — whose name escapes him — was doing a feature on Google bombing and Your JoeDog was google-bombing the President of the United States! What kind of political statement was he making with this google bomb, she wanted to know. Your JoeDog told her that he’s just tossing cyber spitballs from the back of the room.

For those who’ve never heard of it, google bombing is the practice of poisoning search results so that an unrelated page ranks high on a disparaging term. You trigger these bombs by linking to a site with your favorite derogatory phrase. If we all link to the Imperial Grand Poobah of North Korea as Little Kim, we can help craft “Little Kim” as his his online identity.

“But wait!” you might say. “If Google changed its algorithm, then how come Rick Santorm remains a ‘frothy mixture of lube and fecal matter’?” That’s a good question!

Google’s change worked like this: if the words associated with a link do NOT appear on the page, then that link won’t count toward its page rank. Since neither George W. Bush nor Michael Moore described himself miserable failure, those links no longer mattered. Santorum, on the other hand, wasn’t so lucky. Why? Because spreadingsantorum.com contains the word ‘santorum.’

So remember, kids. You can still google bomb your worst enemies but you have to be clever about it. I’ll help you out. Here’s the word ‘asshole.’ Now link the word asshole to this page and I’ll soon be the biggest one on the Internets….