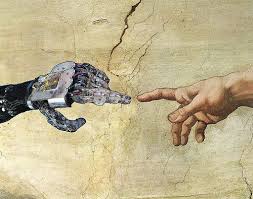 Some are concerned that self-improving artificial intelligence will destroy the world. Stephen Hawking thinks it could destroy mankind. Elon Musk recently tweeted, “I hope we’re not just the biological boot loader for digital superintelligence.” The Guardian thinks they will disrupt jobs while leaving humans physically unharmed.

The idea is this: we build robots with smart digital brians. Those robots use those brains to build even smarter brains. Once they achieve recursive improvement, robot intelligence will rapidly advance. The most advanced species on the planet won’t a species at all – it will be a line of super intelligent robots. Welcome to the technological singularity.

The first scenario requires a goal. To intentionally destroy us, robots must want to destroy us. They’ll need a test case to measure improvement. “This feature kills better than the old one.” Computers don’t feel emotions. They’re not driven by love or hate. If they’re driven to kill humans it’s only because we programmed that feature in the first place. We could be that stupid, but this seems improbable.

The second scenario seems more likely. Self-improving artificial intelligence could be programmed to reverse global warming. When the robot is ready to go-live with its fix, it better have it right or it could render the planet inhospitable to life. In other scenarios, they could deprive humans of resources as they work tirelessly to achieve a goal.

But what if robots achieve something akin to emotion? If they can set their own goals or follow their own “interests”, then who knows where this technology will go. They may devote resources to solving math problems or they might hunt humans for sport. Either way, if technology destroys humanity, we’ll have only ourselves to blame….