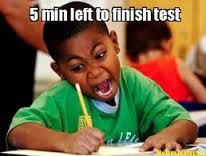 Bureaucrats love standardized testing. And why not? To judge the effectiveness of a system, you need an universal means of testing and measuring progress. Your JoeDog understands why these tests are important; he tests systems all the time. Unfortunately, few people like this particular method:   “Another standardized test? Yeah!!!!!”, exclaimed nobody ever.

They suck and they’re expensive. According to a Brookings study, it costs $1.7 billion dollars to administer them annually. That’s about four percent of the total Federal budget. Your JoeDog has a more cost effective means of measuring the value of public education. Take the total number of annual email scam victims and multiply it by the number of what-were-you-thinking?

If teachers produce just one student who wires money to collect winnings for an Irish lottery he’s never entered, then there’s room for improvement. If this becomes the means by which we evaluate educators, then you can bet your boots there will be a class in That Nigerian Prince Who Wants To Wire You Ten Million Dollars Doesn’t Exist.  And what good is a Home Economics class that doesn’t impart this lesson: Your banking details don’t need to be immediately updated.

One more thing: It’s recently come to our attention that schools in the great state of Kansas are ending the school year early because the people voted themselves massive tax cuts. Tests or no tests, at the end of the day you get the education system you paid for.