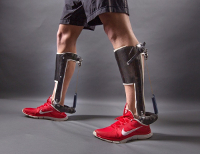 Humans have tried to improve the physicality humans for as long as there have been humans. Our big brains often produce big ideas that our puny bodies can’t realize. We’ve made wings in failed attempts to soar. We’ve produced an endless array of footwear, body armor and extensions for our appendages to improve our physical performance. Generally these devices have failed us but sometimes — such as in the case of artificial wings — they’ve killed us.

In our quest for improved performance, physics is generally the meanie that bites our ass. In 1890, a Russian inventor patented a device to improve our ability to run, walk and jump. Unfortunately, it was too heavy and burdensome to actually enhance performance in any of those areas. “This thing sucks. Take it off.”

In 2013, a Belgian team finally produced a version of the 1890 prototype that was able to offset the burdens of its own weight and produce a net positive performance gain. That may seem like a long time but it’s only about three professional lifetimes. Now the gains keep coming.

An American team led by Steven Collins at Carnegie Mellon have developed an extremely light spring-loaded brace which boosts the performance of the calf muscles and the Achilles tendon by absorbing small amounts of energy when the foot hits the ground. The team reports a 7% performance gain.

Gregory Sawicki, one of the paper’s co-authors, put that in perspective for the Guardian. “A 7% reduction in energy cost is like taking off a 10-pound backpack, which is significant. Though it’s surprising that we were able to achieve this advantage over a system strongly shaped by evolution, this study shows that there’s still a lot to learn about human biomechanics and a seemingly simple behaviour like walking,” he said.

Not bad, humans. Not bad at all.