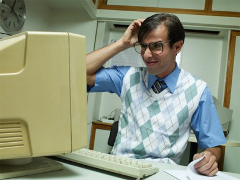 TV5Monde is a French teevee station whose signals were recently hijacked by Islamic militants. ISIS!! David Delos is a reporter for that station. He was interviewed about the incident by an investigative news program. During the interview, Delos was filmed in front of a staffer’s desk. The staffer’s cube was covered with sticky notes which could be read by the television audience. And what was on those sticky notes you might ask? Um, usernames and passwords.

French authorities are still trying to determine how the station was hacked….