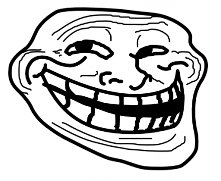 Yeah, sure, this is a nerd-blog but that doesn’t mean we’re a bunch of pencil necked Poindexters. We’re all about a song, and a dance, a little seltzer down the pants….

A JoeDogger sent me an academic white paper from … why are you looking at me like that? Yes, it’s a PDF … what do you mean PDFs are against your religion? It’s an interesting read. You’re not gonna click it, are you?

Alright, here’s the Reader’s Digest: The folks at Stanford have developed a tool that can identify internet trolls with 80% accuracy. The process by which they achieve this is described in the link you didn’t click. In short, this could be the most important paper of our time. We’re talking Nobels!

Consider this: last year someone posted a cake recipe to a Melbourne radio station’s website and all hell broke loose in the comments section. While that episode provided comedy relief for many of us, it had to be unsettling for those whose thing is cakes and Australian radio. Trolls and spammers are why we can’t have nice things.

Fortunately, we’ve pretty much mastered spammers. By “we” I mean people who-do-that-for-a-living. Your JoeDog tossed its hands in the air and gave up. We moved our mail to Google and our comments to Disqus. Hulk smash! Spam gone! Of course, so are the comments. Are you guys that afraid of change?

Trolls are many things — “assholes” comes to mind — but they’re not spam. They first appear as legitimate human beings. As their posting frequency increases, they become more vocal, push more emotional buttons, become increasingly anti-social until finally no one can stand them and a moderator is forced to yield his Hammer of Ban and eliminate them from the forum.

Thanks to the efforts of this team, it may soon be possible to filter trolls much like you would email or link spam: with TrollAssassin (copyright!!)