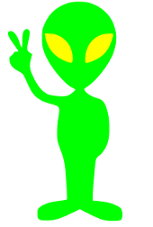 So what happens if we eavesdrop on extraterrestrial dinner plans? Should we attempt to contact the entire civilization?

Stephen Hawking thinks this is a dumb idea. “If aliens visit us, the outcome would be much as when Columbus landed in America, which didn’t turn out well for the Native Americans,” he said.

Is there a chance, however small, that in making itself known to aliens, humanity could be about to make a colossal mistake?

It we live in this jungle neighbourhood where it’s quiet, and if you are a toddler, it’s best to talk it over with the other toddlers before screaming yoo-hoo!

Julianne Dalcanton is more succinct, “In the meanwhile,” she says, “Earth should just STFU.”

Your JoeDog isn’t worried about alien contact. He tends to think advanced civilizations are filled with selfish creatures. Why? Self-interest drives technological advancement. In cooperative societies, worker drones are content to do the same thing millenium after millenium. Sure, bees sting but they’re not going to destroy humanity any time soon.

If we’re going to worry about alien civilizations, then we should be concerned with the ones that possess awe-inspiring technology. Nobody invents that stuff to improve society. They build Constructor Fleets to get rich and get chicks.

In popular lore, Eli Whitney invented the cotton gin to reduce the Southern dependency for slave labor. Bullshit! He solved the problem of separating seeds from cotton in order to make his white ass rich. If that freed slaves, then bonus. But if it increased dependency on slave labor, “Well, then, what are you gonna do?”

Interstellar travel doesn’t align with self-interest. It could take generations until it’s profitable. No self-centered creature is going to take on generations of burden so their great-grandson can become a wealthy womanizer.

For any space program to get off the ground, it requires huge government outlays and that means taxes. We can’t agree to raise the revenue necessary to fix our roads and bridges and we use that shit daily. Can you imagine trying to raise enough revenue to reach Alpha Centauri?

It won’t happen. And nobody in that star system is going to agree to the taxes necessary to reach earth. Relax, people, aliens hate taxes, too.