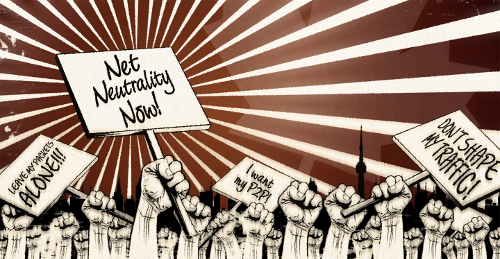 Do you remember when the FCC’s ruling on net neutrality put that issue to rest? Ha ha ha. We’re still fighting the 1960s, our cities are still burning and the fight over net neutrality is never going away.

The battle lines are drawn between two sides: those who think all traffic should be treated equally and those who think ISPs should be allowed to prioritize it. If you think banks should be completely unregulated and free to wreck the world economy, then you probably oppose net neutrality.

Paul released a statement in which he said, without a hint of irony, that net neutrality does “nothing more than wrap the Internet in red-tape.” In the reality-based community, it simply means you place routers and switches on the network and have them do what they were designed to do: move packets across the internet.

If Comcast is allowed to throttle Google’s traffic so it can prioritize its own search, how long do you think it will take before that dispute finds its way to court? Red tape much, Rand?

If ISPs are allowed to slow some traffic and prioritize others, they can effectively pick winners and losers among online content providers. Is that really what a self-proclaimed libertarian wants?

Net neutrality provides an even playing field. It’s hard enough for Your JoeDog to compete with Tech Republic for your precious eyeballs. Imagine if his traffic was throttled because he didn’t cut a very large check to AT&T.