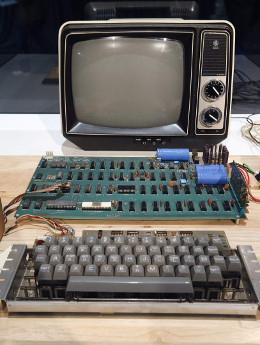 An original Apple computer, now known as the Apple-1, which was designed and hand-built in 1976 by Apple co-founder Steve Wozniak is shown at a press preview at the Computer History Museum in Mountain View, California, USA, 24 June 2013. Christie’s is auctioning the Apple-1 at its First Bytes: Iconic Technology From the Twentieth Century, an online-only auction featuring vintage tech products. EPA/TONY AVELAR

You were a lady of grace, about 60 years old. You had several boxes of old computer parts. You said you were cleaning out the garage after your husband died. You didn’t want a receipt nor did you leave any contact information.

I worked for a computer recycling shop and strolled past those boxes for days until I finally went through them. After discarding several old keyboards and other worthless items, my excitement started to build. “Holy cow!” I said. “This can’t be real … can it?”

Its body was made of wood and its motherboard was large and clunky, a monstrosity that many other people would also consider junk. But it wasn’t junk. No, far from it. You had discarded an original Apple I computer, hand-crafted by The Woz himself. We sold it at auction for two-hundred thousand dollars. Company policy holds that all proceeds from such sales must be split with the original owner.

[Reuters: Money Awaits Recycler of a Rare Apple I]