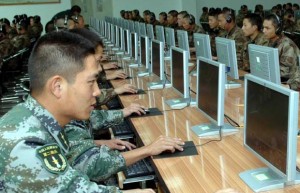 Your JoeDog is not one of those knee-jerk anti-gub’mint guys but god damn sometimes they test his patience.

By now you’ve heard of that database breach in which the Chinese allegedly stole the personal information of approximately 4 million government employees. About half of those records represent current employees, the rest are for previous workers. According to an unnamed US “official,” the data goes back to 1985.

CNN interviewed “experts” who told the network that the Chinese appear to be building a large database of Federal employees which will help them model the organization and setup insider attacks.

One-third of Your JoeDog’s visitors are from China and we’re starting to feel like an abused spouse. We give you free software and you break down the door and steal our records. Thanks, China. Thanks, a lot.

But here’s the real kick in the ass: US government officials cite this breach as a reason to pass a host of legislature which will, among other things, put more personal information into the hands of government. Information-sharing clauses in these bills will essentially channel more personal data from businesses to the Federal government. That makes Your JoeDog’s head explode. The government is essentially saying, “We can’t secure our own records so give us more records.”

The chairpersons of the select committee on cybersecurity have their hair on fire. They predict dire consequences if we don’t grant them more personal data: “Business and industry leaders warned us of the growing threats during various hearings, and this attack shows why the Senate needs to move quickly on a cyber bill.”

The shittier a bill is the quicker is must be passed, people. Don’t worry your pretty little heads about its contents.

Funny thing: Newton’s Third Law applies to politics as well as physics. For every asshole, there’s an equal and opposite anti-asshole. Are you from Oregon, Dear Reader? Then pat yourself on the back because your senator is our anti-asshole.

I believe sharing information about cyber-threats is a worthy goal, it is unlikely that information sharing by private companies would have made any significant difference in protecting federal employee data. That’s why cybersecurity experts say that passing a bill like this will do little to reduce security breaches.

“This is a bad excuse to try and pass a bad bill.”