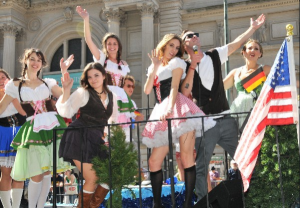 The Times posed this question a few days ago but Your JoeDog is catching up: “Whatever happened to German-America?” The short answer is this: two Goddamn global wars. After those bitter conflicts they didn’t feel like being German any more.

In the late 80s, Your JoeDog moved into an Upper East Side apartment in Yorkville. That’s a Manhattan neighborhood also known as Germantown. It stretches from the East River to Lexington Avenue. It was there that he witnessed first hand the dying of the German-American light.

Back then, it was filled with German stores, delis, bakeries and bars. The Viennese were there, too. Their pastries could brighten any morning. With two exceptions, these businesses were in their dying throes. The owners were old and the help was even older.

On Third Avenue, there were yellow pre-war tenement buildings. On top of those buildings you could find swastikas formed with brown bricks against a yellow background. They remained on those buildings until the early 21st Century. When they were laid by German-American construction crews, Hitler was not yet revealed as evil. Yet they remained on display long after the world knew he was a monster. The brown emblem was eventually blasted away but you can still see the Nazi symbol thanks to its brick outline.

Now almost nothing is left of Germantown except the venerable Heidelberg Restaurant on 86th and Second. Your JoeDog still visits that bar several times a year. A little while back we met an old Czech woman at the bar. She nursed a Jaegermeister with a beer and finished both drinks at the same time.

She was an ethnic German from the Sudetenland. In 1945, she hid under a bridge as the Red Army marched over it. She was there with her sisters and a cousin. The Red Army was raping its way across Eastern Europe then. We weren’t sure if she was unscathed but they didn’t find her on that particular day.

She emigrated to New York in 1948 and never lived more than a few blocks from her original apartment. I told her Barack Obama — a German-American — lived in this neighborhood, about a block from my old apartment. This greatly excited her and she announced it to everyone at the bar. Then I reminisced about the Old Neighborhood and that made her even more excited. Finally she met someone who still remembered it.