When it snows, the snow is everywhere. It’s on the roads, it’s on the sidewalks but it’s also on the media. Local news covers it. National news covers it. Cable news and newspapers cover it. If you want to know about non-snow issues at the height of a snow storm, you’re fscked. Everybody’s covering snow. 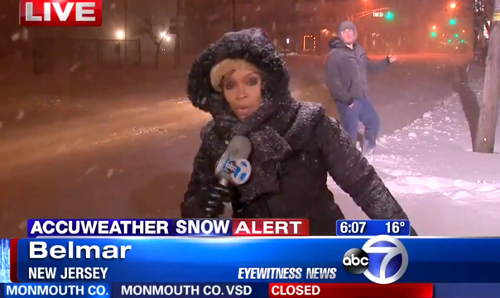 They report it because people are interested and it’s easy to do. Send a reporter into the street. See that white shit falling on his head? That’s Goddamn snow! How much is going to fall? We don’t know, between one and a million inches.

The pope is in the US right now and he’s on all the channels. There’s probably newsworthy events also taking place — you know, things that affect our lives — but we don’t know about them. Why? Because everyone’s covering the Goddamn pope. The pope is basically snow.

Last night, NBC News covered a bus accident in Seattle and devoted the rest of the broadcast to the pope. Did he cure a leper? No, he got in his stupid Popemobile and cruised down Fifth Avenue to St. Patrick’s Cathedral. What did he do when he arrived there? He went inside.

Is this newsworthy? Your JoeDog’s not a religious sort but he’s pretty certain the pope’s been to church before yesterday. He pretty much lives in one.